Ranked #40 on Rolling Stone's List of the 500 Greatest Albums of All Time: Love Anticipates Late 1960s Turbulence Via Prophetic Songs and Dark Themes

Any discussion about the finest psychedelic rock record ever recorded is incomplete if it doesn't grant consideration to Love's Forever Changes. Ranked by Rolling Stone as the 40th greatest album ever made, and named by Mojo the second-greatest psychedelic set in history, the effort is an internationally recognized seminal work of art. Transcending language and convention, its magnitude and magnificence need to be heard again and again. For here is an effort whose mind-boggling acoustic complexities and kaleidoscopic nuances are tailored for high-fidelity playback.

Mastered from the original master tapes, Mobile Fidelity's numbered-edition 180g 45RPM 2LP set affords the masterpiece the white-gloves treatment and golden-hued analog sonics it has always deserved. Nearly unlimited headroom, vast instrumental separation, transparent clarity, artifact-free atmospherics, and faithful balances appear out of jet-black backgrounds. The music appears to float on clouds, with the woody tones emanated by the acoustic guitars and brassy signatures of horns emerging with lifelike detail. Turn it up as loud as you want; the sole limitation will be your system's potential.

Commercially ignored upon release in November 1967, Forever Changes confronts the alienation, paranoia, violence, and strife that would soon plague the countercultural movement and send the Summer of Love into a tailspin. Apart from its lyrical themes and prescient malaise, the record's enduring nature equally owes to intertwined arrangements sewn together with Latin guitar-picked lines, finessed folk harmonies, mariachi-inspired horn charts, and subdued strings.

The seemingly opposing combination – ominous, dark reflections situated amidst lush, light melodic beds – affords Forever Changes a distinguished tension of claustrophobia and openness, dourness and ecstasy, ugliness and elegance enjoyed by no other record in the rock canon. Much of the contrast owes to leader Arthur Lee's mental state and pertinent observations. Lee, whose suppressed romanticism often surfaces even amidst the blackest shadows and most cynical moments, believed he would soon die, and hence channeled everything from lasting hopes to acid-addled decay to the chilling testimony of a Vietnam veteran in his narratives.

Alternatively sad and beautiful, the album-opening and flamenco-inspired "Alone Again Or" establishes the mood for what follows. Vocals overlap and soar; tempos rise and fall; surrealism trades places with reality.Forever Changes thrives both because of and in spite of a surfeit of labyrinthine chords and difficult notes that never repeat. Its ambitious construction almost forced the already fractured band to cede responsibilities to session musicians, which appear on two tracks. The quintet's resolve to not only complete the album, but to do so with such poignancy and curiosity, further enhances Forever Changes' standing.

No wonder that, in the twilight of his troubled career, Lee performed the record in its entirely during concerts met with overwhelming critical acclaim. It was, and will always be, a personal manifesto of timeless relevance and appeal.

Secure your numbered analog edition of this watershed record by ordering today! 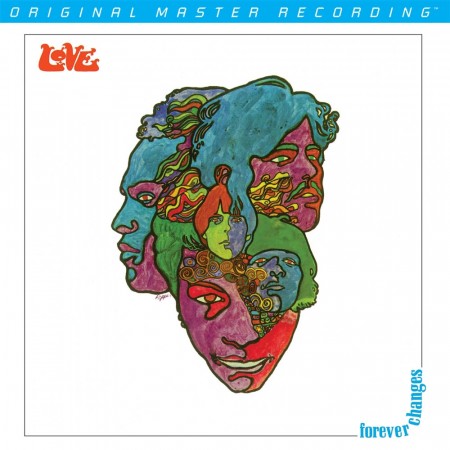