This double album originally released in 1964 opens with a then-new Bob Dylan song, "The Times They Are A' Changin'," and closes with the best-known song ever written by Pete Seeger and Lee Hayes, "If I Had a Hammer." That seems to sum up Peter, Paul & Mary, but In Concert offers a lot more than that, writes AllMusic.

The surprises include vignettes in blues and gospel, and, most notably, the group's humorous digressions. Peter, Paul & Mary spared few opportunities for a good laugh on stage, beginning with the introduction to "A' Soalin'," which shows off a lightheartedness that was an essential part of who they were, even as it leads into an exquisitely sung round-like piece that should have found its way into the repertory of Steeleye Span. "Blue" gives the trio a chance to play around with rock & roll, from doo wop to British Invasion, through the song "Old Blue" (satirizing folk music purists at the same time), and Paul Stookey adds his own sound effect embellishments to Woody Guthrie's "Car-Car."

The solo spots are also worthwhile, particularly Peter Yarrow's introspective version of "Le Deserteur," followed by his dazzling, rousing sing-along on "Oh, Rock My Soul"; and Mary Travers' rendition of "Single Girl," a low-key proto-feminist song. The group's rendition of "It's Raining" achieves an exquisite mix of gossamer textured harmonizing and thematic innocence, and their rendition of the Reverend Gary Davis' "If I Had My Way" is a bracing re-interpretation for three interwoven voices. Finally, the version of "If I Had a Hammer" that closes this album is superior to their hit single of the same song. Mastered by Kevin Gray, 200-gram pressing by Quality Record Pressings, gatefold jacket. 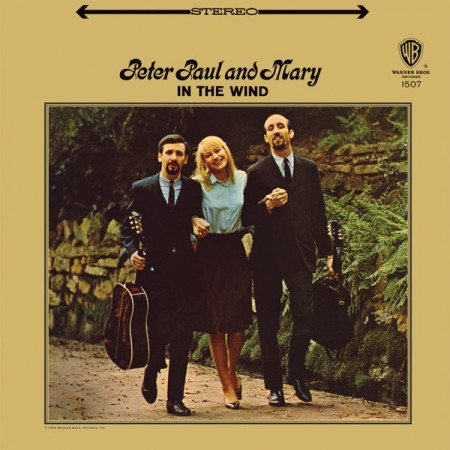 Peter, Paul and Mary: In The Wind