Counting Crows' 1993 debut album released for the first time as an LP in the U.S.!

Mono & Stereo magazine's reviewer Matej Isak says Chad Kassem's efforts via his Quality Record Pressings pressing plant "goes beyond simple vinyl revival." "As (it is) for many, August And Everything After is my favourite Counting Crows album. It could be a generation thing and not only a "Mr. Jones" hit single impact. It's true, that this track brought the band glory and recognition to the stratosphere, but that's not merely it. The whole album is a celebration of refined producing and musicianship. ... We might be accustomed to the CD sound of the album as it was mastered as such, but thank God to Chad's persistence of seeking out the releases with analog session tapes; what we have here is a new true analog jewel recording being pressed." — Matej Isak, Mono & Stereo magazine, May 2013. Beyond highly recommended." Named a Mono & Stereo Strictly Vinyl Analog Award winner.

"I compared this double 45 with the old gold CD from Mobile Fidelity, which was far superior sounding to the original CD and boy did it suck compared to this. If you want to know why CDs are an unacceptable medium for rock music compare for yourself. The idea that CDs are "transparent to the source" is such bullshit I don't know where to start. Wait! Yes I do! Compare this double 45 to any CD version. The CD sounds cloudy with soft indistinct drums and no crack whatsoever to anything that should sound dynamic. ... If you're part of the 'Mr. Jones' generation that came of age to this record, you'll want to invest in this sonically spectacular version expertly mastered by Ryan Smith at Sterling Sound. You may think you've hear this album but until you hear this edition you really haven't. Quality Record Pressings plating and pressing quality remain models of velvety quiet backdrops and explosive sonics." — Music = 8/11; Sound = 10/11 - Michael Fremer, AnalogPlanet.com, February 19, 2013.

Counting Crows put in the gigging hours during the early days of the band, and it paid off. By the time they signed to Geffen in 1993, they had already built up a significant fanbase. Their debut, August and Everything After, produced by T-Bone Burnett, was released later the same year and became an unexpected multi-platinum hit, partly as a result of the successful single "Mr. Jones."

"We were fortunate that this was recorded to analog in an age that had many digital recordings," says Acoustic Sounds founder and CEO Chad Kassem, who describes August and Everything After  as "one of the better albums in the entire '90s," with a timeless vibe and classic pop sound. Although recorded to audio tape, the album was originally mastered for CD and featured a longer playing time than a standard LP. Thus Analogue Productions has reissued August and Everything After as a double LP set to maximize the dynamic range of this recording. This is the first time that the 'Crows multi-platinum smash has been released in the U.S. as an LP. Mastered by Ryan Smith at Sterling Sound. 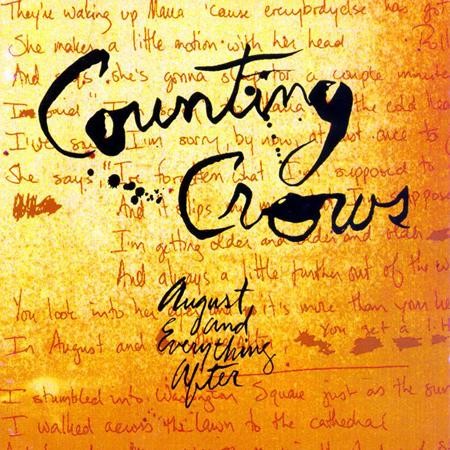 Counting Crows: August And Everything After