Sleeved in a deluxe tip-on jacket from Stoughton Printing

Gerry Mulligan Meets Ben Webster was just one of many "meets" albums that Gerry Mulligan appeared on during the period when this classic was recorded — Nov. 3 and Dec. 2, 1959, in Los Angeles. Mulligan and Pepper Adams were the baritone saxophonists during the golden age of modern jazz, both masters of the unwieldy and deep-toned instrument.

History was made here, as was a classic record for the ages. Now, hear Gerry Mulligan Meets Ben Webster in all its sonic glory, courtesy of Analogue Productions and Quality Record Pressings! Mastered and cut to lacquer by Ryan K. Smith at Sterling Sound, working from the original analog tapes, this 33 1/3 edition sounds spectacular, pressed on super-silent 200-gram vinyl by Gary Salstrom and his crew at Quality Record Pressings. Nothing but the best packaging is allowed here either — you´ll get a handsome heavyweight tip-on jacket from Stoughton Printing.

Mulligan was an innovator of the west coast cool jazz style who flourished playing with all manner of jazz musicians. The tunes he and Webster recorded are smooth, lush and emotional, driven along by a rhythm section that swings with just the right amount of bop. The result is an album that´s included among NPR´s "Basic Jazz Record Library."

Let this silky and supple set make its presence known — order your copy of Gerry Mulligan Meets Ben Webster today, and prepare to be enveloped by the sound. 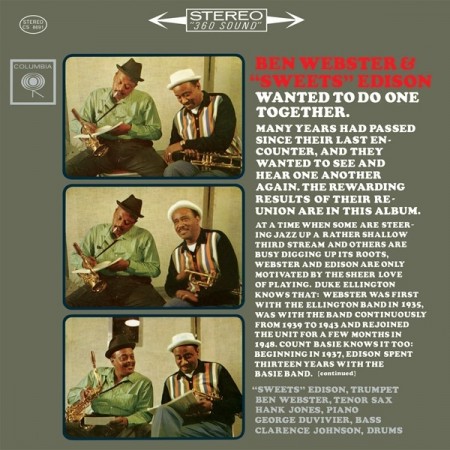